When you said “I do,” at your wedding, after being asked if you would always stay committed to your spouse, you likely believed it at the time, mostly. Your love was real, but there was still uncertainty. Sure, you were devoted to them at the time, but who knew what the future would bring?

It’s easy to scorn people who even think about having affairs. We’re so conditioned to see monogamous unions as the only moral path that we don’t even think about why someone would break the “sanctity” of their union. That is, until we’ve tempted ourselves.

Having an affair now is different than it was in the past. You don’t have to stay after work with your secretary or chat up the proper suitor at the local watering hole. Pull up the right website, and you can find dozens of great candidates when looking for an affair.

These sites understand that privacy isn’t just a request with affair dating; it’s a must. They have earned incredible trust among their users and also an appreciation for their functionality and features. Whether you want just to share some steamy messages or start a brand new relationship, you should find the right site easily.

We want to steer you away from the bad sites, the ones that will waste your time at best and violate your privacy at worse. These are the four best affair sites. While they all have their shortcomings and strengths, you should finish this article understanding the purpose they each serve. 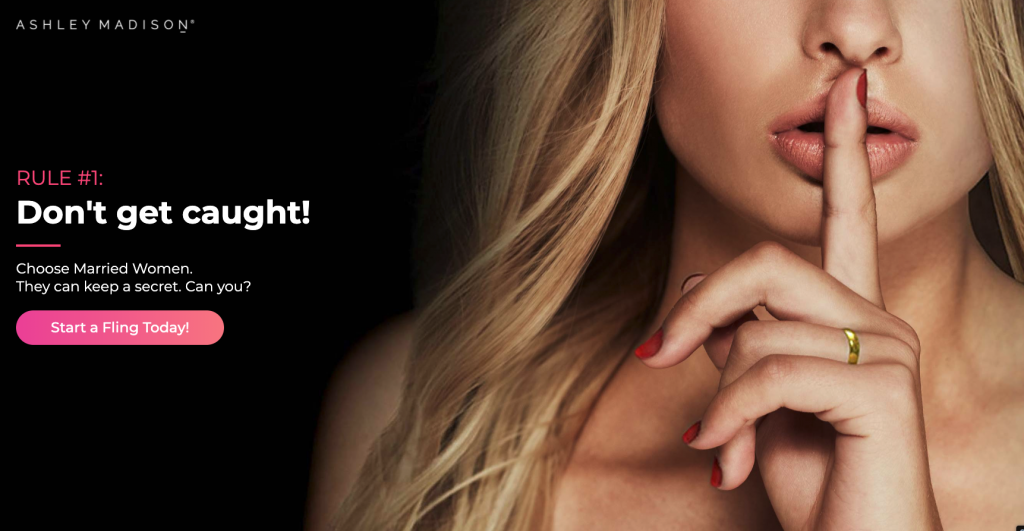 Ashley Madison is as synonymous with affair dating websites as Q-Tip is with cotton swabs.

Since its founding in 2001, Ashley Madison has normalized this kind of dating and showed there was a market for online dating beyond people looking to find their “one true love.”

It’s a veteran of the online dating world, and that alone definitely warrants it some respect, even if you disagree with its concept.

With millions of users spread across multiple countries, including about 12 million in the United States alone, Ashley Madison earns its spot as number one on our list. You may very well know multiple people who use Ashley Madison, even if they wouldn’t dare admit it.

It’s effortless to join Ashley Madison. That’s because they require minimal information as a means of protecting your privacy.

A photo is required, but you’re allowed to alter it to eliminate distinguishing features that could expose you. That's why using their blurring tool is so great.

Female users can send messages for free, but men have to pay. It’s a pretty great concept since lots of women avoid dating sites out of the costs. It’s not the exact dollar figures, which any decent-earning woman can afford. It’s having to pay, period. After all, why would a woman want to pay to find a man who’s paying to find her? It might seem trivial, but it’s a genuine concern.

Ashley Madison knows how to appeal to men and women and creates a more satisfying site as a result. With a richer database of women, male users have far more to enjoy and look forward to.

Upon signing up, you can match with partners and speak with them in the chatroom.

An affair is a big deal, but Ashley Madison makes it a lot less scary. It’s effortless to join and find great potential matches.

Your new love may be one in a million, but millions of great users are on Ashley Madison. 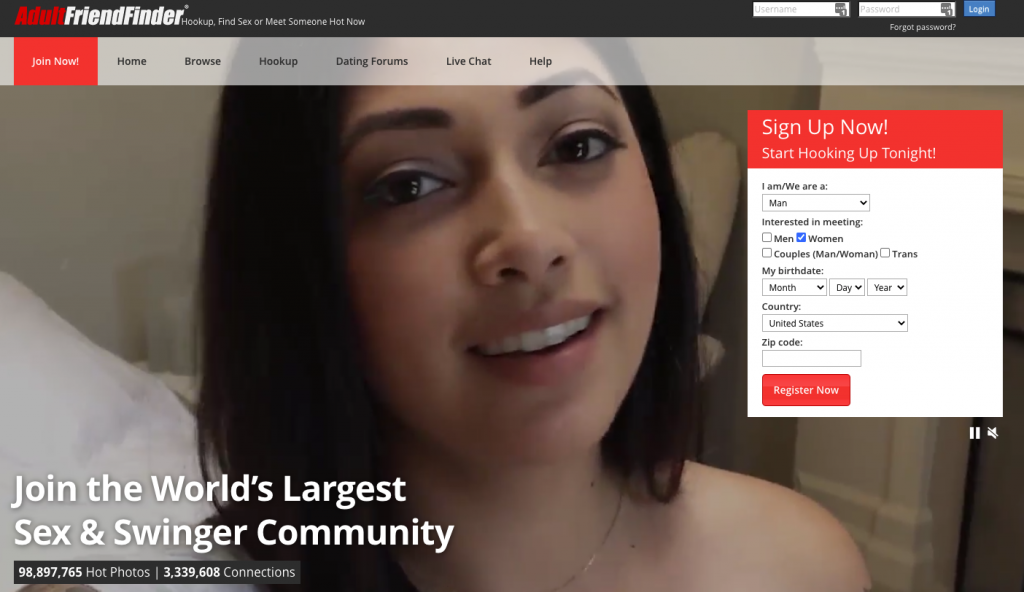 Adult Friend Finder is a well-promoted alternative dating site. It’s not only for affairs, but it’s helpful if you’re looking to venture outside of the bond of matrimony.

Since it’s not explicitly for affairs, it’s not quite as good as Ashley Madison. However, it’s still a respectable runner-up, and it’s a lot of fun to browse. You might feel a spark that’s been missing for years after just a few minutes of surfing.

They do require a username, as well as an email for the proof. You might want to make a separate, private email account for this site. You’ll also need to put in your sexual orientation/gender identity so you can get the proper matches.

It might be a slightly shocking to see how liberated Adult Friend Finder users are. Sex discussions are very frank, and nude photos are not uncommon.

It’s better for hookups than for full-on affairs. If you find someone you like, make sure the expectations are clear on both ends.

A con of Adult Friend Finder is that there are far more men than women. Women and men are also both required to pay, thereby decreasing the number of female users.

If you want to have a fun hookup without anything too serious attached, check out Adult Friend Finder. 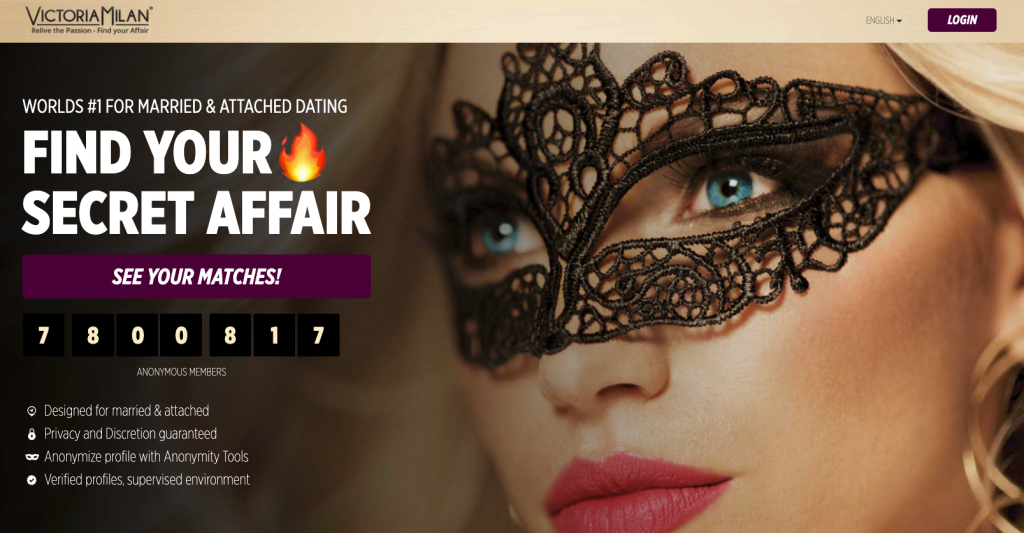 Although dating sites offer a pretty straightforward solution to marital frustrations, they can also come with their own share of complications.

As much as you might want to have an affair, you may also be left with a worry about getting caught. Victoria Milan is an excellent choice if you don’t want to feel like your information is at risk.

It’s very fast to join and lots of fun to navigate. As with Ashley Madison, Victoria Milan lets you blur your photo to prevent being caught.

Their best feature is arguably the “Panic” button. If someone is about to walk in while you’re using this site, you can press this and be brought to a non-suspicious one.

You’re encouraged to fill out your Victoria Milan profile as well as possible. A premium membership is also necessary for messaging.

Don’t skimp on information when discussing yourself. You don’t need to go into your life story, but you should at least know why you are and what you can offer.

Victoria Milan’s security is very tight, and their site is very well maintained. If you understand discretion and personal responsibility, you should have a very good time with this site.

You might get the jitters at first, but those should go away the more you use Victoria Milan.

It can feel pretty sickening to be on other dating sites and see how much they emphasize specific moral standards for their users. With BeNaughty, such grandstanding is not an issue. They know that their users are looking for fun, not to be judged.

Although it’s fast to sign up for BeNaughty, you will need to have your picture verified to complete the process. Don’t try to pass off any stock model photos as your own.

You will need a paid account to look at profiles. Unfortunately, a lot of people leave their profiles blank. The absolute best way to connect with someone is by speaking to them in the chatroom.

BeNaughty has people looking for affairs as well as just some fun, outside of cheating.

Should you want to undo the shackles of your marriage or long-term relationship and cut loose, consider BeNaughty. It’s a good place for when you’re feeling bad.

Final Verdict – Which Marital Affairs Dating Site Is The Best?

Having an affair is something you can’t be talked into or out of. While others will try to influence you and may succeed somehow, it ultimately comes down to you and what you want. If you decide you want to cheat on your partner, you should use a site that will protect you as much as possible.

Did you read this wanting to understand why anyone would dare cheat on their partner? Well, that’s like asking why someone likes a food you hate. No explanation would make you fully understand. If affairs aren’t for you, don’t have one, but don’t try to cast aspersions on those who do. In short, mind your own business.

If you want to have an extramarital affair, you need to be careful. If any piece of information getting out could put you at risk, don’t share it.

These are the four best cheating sites. Other marital affair websites have tried to cash in on this growing trend but have quickly exposed themselves as beyond second-rate.

The best affair website is also the most famous one: Ashley Madison.

It combines the best of all of the other sites and an awesome free messaging feature for women.

Women on Ashley Madison are really set, being able to enjoy an excellent dating site at no cost. There aren’t too many roadblocks for men, either. For a reasonable price, you can interact with so many beautiful and exciting women.

Anyone who wants to have an affair should be able to find it with Ashley Madison. We’re not telling you to do it, but use Ashley Madison if you do.

If you choose to sign up, you can use our special link by clicking here.